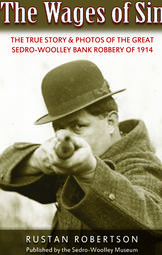 The Wages of Sin

The year was 1914, and the country was on edge as Europe was just months into what would become the First World War.  Locally, the Pacific Northwest was experiencing a spree of bank robberies from Seattle north.  So hackles were raised in Sedro-Woolley, Washington in October when suspicious characters were thought to be casing local banks.   The town was ready when the hoodlums set their plans in motion on a Saturday night.  After the First National Bank was robbed of over $11,000 in gold, the bandits escaped and led posses on a manhunt that extended into British Columbia.  In the end, four of the five robbers were killed and just over half of the money was recovered, leaving the whereabouts unknown of nearly $5,500 in 1914 gold; roughly $375,000 at today’s value.